On May 4th, New Jersey shoppers found themselves carrying home unbagged goods from the supermarket, unless they happened to have their own or were willing to plunk down as much as $1.39 for a reusable bag. The “Bag Ban” law, enacted on January 4, 2020 by Governor Phil Murphy and the New Jersey Legislature is not the only one of its kind but has been called one of the most progressive bag ban laws in the country.

In addition, eateries and stores in the Garden State must stop providing or selling polystyrene products like cups and plates — commonly referred to as Styrofoam. Plastic straws, while not banned, can only be provided to customers at cafes and other businesses if requested.

New Jersey isn’t the first state to impose a state-enforced ban and likely won’t be the last. California, Connecticut, Delaware, Hawaii, Maine, New York, Oregon, and Vermont have also enacted bans, with California being the first in August of 2014 with its ban originally focused on large retail stores. Countries in Europe and other modernized parts of the world enacted legislation well in advance of America. 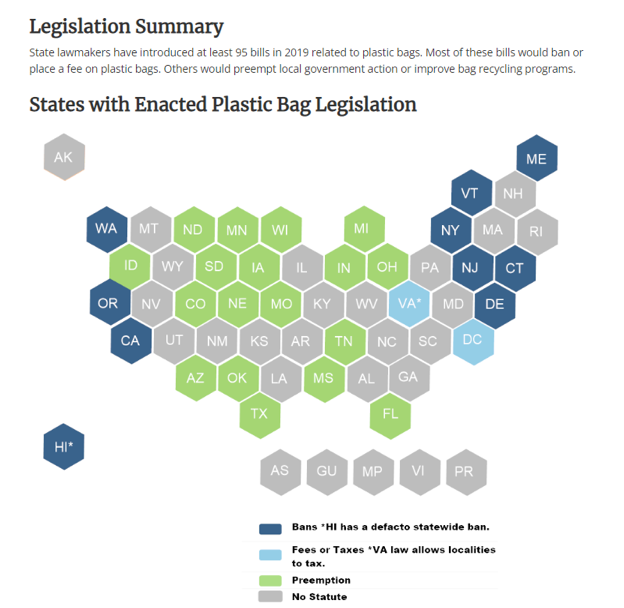 The case behind this trending legislation is the need for corporate responsibility related to the volume of plastic passing from retail to consumer and then into the environment. Plastic that is not recycled or incinerated may end up in a landfill, or very well could become litter, which is proven to make its way into neighboring waters where it then threatens ocean life.

A recent New Jersey article reported customers doing everything from “dropping their items and going home,” to “saying they are glad to see their state stepping up to make a difference.” For retailers, resolving customer complaint to the best of their ability “just comes with the territory” says one local market owner, “We don’t have a choice in the matter,” he said. “We either comply or face hefty fines, in some cases as much as $5,000.”

And as far as the shoppers, fast-forward one month ahead now and things seem to be calming down. One recently interviewed was quoted saying, "It’s going to take some time getting used to, but my family and I are on board with doing what we can to cut waste and help out the environment.”

Evidence from other states suggests the consumer will ultimately adapt. It is too early to tell if these restrictions will have a material impact on retail sales.

For more information on plastics and ocean life, click here. Any opinions expressed in third-party published works are not necessarily the opinions of Spectas, a division of SMP Industries.

2021 Holiday Sales Prove to Be Unprecedented

2021 Holiday Sales Prove to Be Unprecedented

Reports of holiday and post-holiday sales at retail are in and by all measures exceeded everyone’s expectations. Shopper...